Formal theory of the world economy

Axiom 1. The history of mankind consists of two phases, closed in order of succession to each other within the cycle:

Axiom 2. The world economy is a relatively closed system of limited natural resources.

Axiom 3. Absolute overpopulation is a global shortage of limited natural resources in a relatively closed system of the world economy.

Axiom 4. Relative overpopulation is the historical result of robotization of labor, automation of the production process and artificial intelligence, where, on the one hand, the human factor is displaced to the minimum of necessity, and on the other hand, a new class is formed - the former proletariat.

An empirical theory of the world economy

Deagrarization (de-agrarianization) is a long-term decline in the share of agriculture in gross output with a simultaneous fall in both the rate of profit in this industry and the employment of the population in it.

"Deservization" is a historical process of the decline in the share of the non-productive services sector in the country's gross output against the background of a total decrease in both the profit rate and the share of employment in all three sectors - agriculture, industry and services.

The "deservization" cycle is formed in two phases: the servicing phase is accompanied by the growth of the service sector to the detriment of industry and agriculture, and the deserving phase is characterized by the mature state of the information society in the "global conditions" of the stationary level of industry and the agro-industrial complex.

Axiom 5. It is impossible historically to come to the deagrarianization of society without avoiding the process of agrarianization.

Axiom 6. It is impossible to undergo deindustrialization of society without creating a developing industry, which is historically based on a developed agrarian.

Axiom 7. The phenomenon of "deservization" begins on the basis of the chronology of the development of three sectors of the economy - agrarian, industry and service, where the first and second sectors have already undergone the processes of deagrarization and deindustrialization, respectively.

Axiom 8. The history of mankind is a chronology of three successive cycles:

1. The cycle of deagrarianization, which began with the phase of agrarianization of the world power of Ancient Egypt and ended around the end of the 19th century.

3. The cycle of "deservization", which has not begun, but will be formed in the future on the basis of developed agrarians, industry and services.

Axiom 9. The history of mankind is a periodic system of socio - economic formations (see the table below), where the first cycle of deagrarization includes the primitive communal, slaveholding and feudal systems, the second cycle of deindustrialization includes capitalism, and the third the cycle of "deservization" is post-capitalism.

Axiom 10. Economy is a set of relations that develop exactly in the order of the cycles within the periodic system of social and economic formations (see the table below). 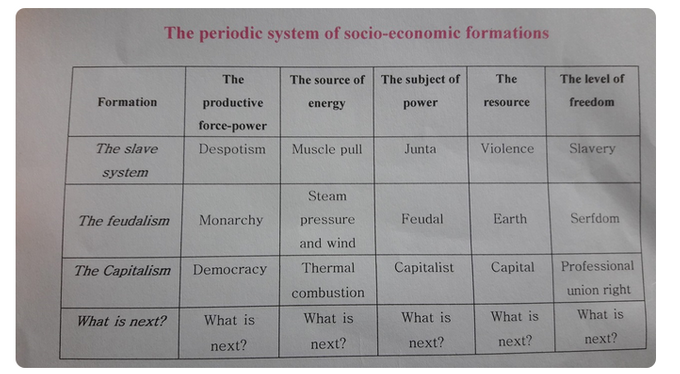